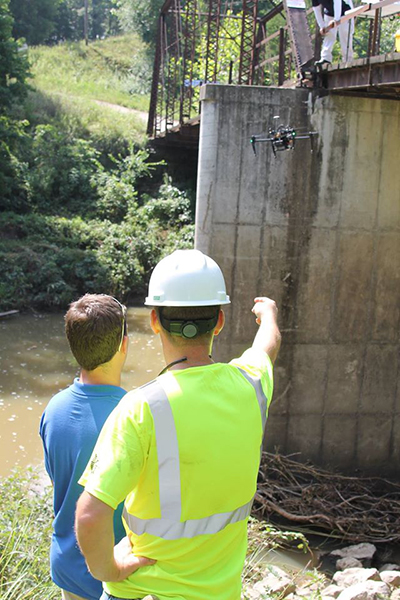 The collaboration began in 2015 after a Missouri Society of Professional Engineers (MSPE) Western Chapter meeting during which Assistant Professor of Engineering Travis Fields presented on his tethered drone prototype. Through the partnership, UMKC was able to test their provisionally patented system in the field and receive expert feedback from bridge inspectors, while MEC was able to enhance its data collection and experience with drones.

“This system has the potential to really change how companies like MEC do inspection for bridges as well as other structures by reducing the dangerous situations for the personnel,” said Fields. “It is also more efficient, so that means less cost to the consumer, which generally comes back to the tax payer; so that benefits everyone.”

While last year’s prototype had image contrast issues and could not get close enough to the bridge structures to collect usable data, this year’s model was able to be used to view the floor beams and stringers on the bridge and determine whether there were structural issues that required further inspection.

“Today, with the creek being higher than normal, we normally would have had to hang underneath the bridge to view the floor beams and stringers, which is a safety issue,” said MEC Project Engineer Dustin Berry, P.E. “With the drone, we were able to get within arm’s reach and see everything we needed to see, and it saved me from hanging underneath the bridge.”

During the inspection, the camera on the drone streamed 4K video that engineers saved for review. When viewing particular areas and critical connections, MEC directed Fields on which high-resolution images to capture, and several of these images were included in the final bridge inspection report.

Fields has worked with Associate Professor of Civil and Mechanical Engineering John Kevern to develop their tethering system, which makes the drone unique. The tether, which connects the drone to a gas-powered generator is lighter than the onboard battery and makes the flight time almost unlimited while also eliminating the risk of a runaway.

Ither applications of the technology for inspection may include other structures, such as water towers and utilities, as well as the possibility for adding LiDAR (light detection and ranging) scanners to the drone to enhance data collection.

“The partnership with MEC has been phenomenal,” said Fields. “We aren’t inspectors, so we aren’t qualified to make decisions on whether or not this system works. Working with MEC, we were able find what the issues were and how we can address them in the future to make a system that works well for this application.”